If needed, appointments can be made to accommodate any conflicts with the scheduled hours.

Licenses will be issued by appointment only.

You can only renew online if Clerk's office has current rabies on file.

For a new dog license, you cannot process online. Please provide to the Clerk the current rabies certificate and proof of spay/neuter. This information can be mailed or left in the drop box to the left of Town Hall door.

-Every dog, regardless of age, owned or harbored in New York State for longer than thirty (30) days must be licensed in the town, city or village where the dog is being harbored. The following are the only license exemptions:
-If the dog is under four (4) months of age and not running-at-large (off the owner's premises)
-If a non-resident brings a dog into New York State for less than thirty (30) days and the dog is licensed according to the resident state's licensing laws.
-Every licensed dog must have a certificate of rabies immunization issued by a licensed veterinarian.
-License renewal forms will be mailed directly to the dog owner by the Town Clerk by the first day of the month that your license is due to expire.

License Fees
The Town of Pomfret license fees are:
Spayed/Neutered Dog - $8.00
($1.00 of this fee is used to fund the NYS Animal Population Control Program)

Unspayed/Unneutered Dog - $18.00
($3.00 of this fee is used to fund the NYS Animal Population Control Program)

No individual resident may maintain more than four (4) dogs at a single address without complying with specific licensing regulations through the Town Clerk's Office.

Dog Control Officers are employed by both the Town of Pomfret and the Village of Fredonia.

The DCO and shelter service enforces both State and any local dog laws and ordinances.

Further, it is the DCO's responsibility to pick up lost and stray dogs and humanely care for them until they can be reunited with their owners or the specific time frame required by the New York State Department of Agriculture and Markets has been met, which ever comes first.

Dogs are not released until they are properly immunized against rabies infection and all licensing and impound fees are paid.
If your dog is lost or you find a lost dog, immediately contact your local DCO or shelter. Owners should seek lost unidentified dogs at the municipal shelter. The Pomfret/Fredonia shelter is the 'Fredonia Animal Hospital'.

If a dog is lost but identified with a NYS identification tag, the DCO will contact the Town Clerk to trace the dog tag to the owner.
The local dog control officer must institute action for violations of both state and local laws. Fines or civil penalties shall be up to $25 for the first offense, $50 for the second and $100 for the third and subsequent offenses.

If a dog injure or kill livestock, the local assessor should be notified immediately. Do NOT destroy or bury the animals. They must be available for examination so the assessor can appraise the damage.

VITAL RECORDS
BIRTH CERTIFICATES
The Clerk, as Registrar of Vital Records, is responsible for issuing Birth Certificates in the Town exclusive of the Village of Fredonia, where this function is performed by the Village Clerk.
Few births have been recorded in the Town since Brooks Memorial Hospital was constructed in the adjacent City of Dunkirk in 1898. Most births of Town of Pomfret residents are recorded in the Dunkirk City Clerk's office.
No hospitals currently exist in the Town of Pomfret.

MARRIAGE LICENSES
Any Town or City Clerk in New York State can issue Marriage Licenses for solemnization ceremonies in any location in New York State.
Both the Bride and the Groom must appear before the Clerk.

TWO FORMS of Identification for each party are required by the Pomfret Town Clerk;
1). Certified Birth Certificate OR a Passport must be presented to establish a date of birth.

Divorce decrees or death certificates from all previous marriages of both partners must be presented.

Marriage licenses must be requested at least twenty-four (24) hours before a marriage solemnization.
A new license must be secured if more than sixty (60) days passes since the old license is secured.

US or town citizenship is not a requirement for a marriage license in New York State.

No blood test is required.

DEATH CERTIFICATES
The Clerk issues Death Certificates describing individuals who pass within the Town of Pomfret exclusive of the Village of Fredonia, where this function is preformed by the Village Clerk.
Most Death Certificates for residents of the Town of Pomfret are issued by the Dunkirk City Clerk, where Brooks Memorial Hospital is located.
Newton Memorial Hospital, a County-operated tuberculosis and chronic diseases hospital, operated in the Town during the mid-twentieth century, and the Death Certificate archives include death records reported by that hospital.

The Clerk issues Burial Transit Permits to morticians to permit legal movement of cadavers across the Town borders.

Application for Copy of Marriage Record 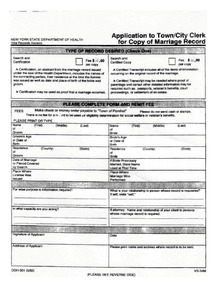 Download "Application to Town-City Clerk for Copy of Marriage Record.pdf"

Application for Copy of Death Record 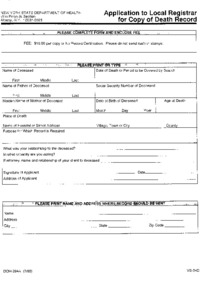 Download "Application to Local Registrar for Copy of Death Record.pdf"

Application for Copy of Birth Record 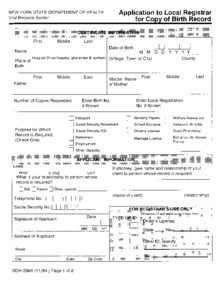 Download "Application to Local Registrar for Copy of Birth Record.pdf" 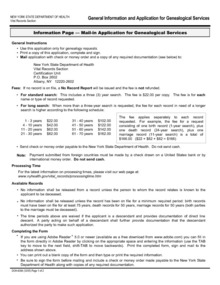 Do not use  the NYS address listed on page one of this application.

The Clerk is able to search the Town archives for birth, marriage, death, and tax assessment records.
Generally fifty (50) years must have passed since marriage or death before genealogical copies can be issued.
Seventy-five (75) years must have passed since birth before genealogical copies of birth certificates can be issued.
The individuals themselves or direct descendants can obtain copies before these dates as can individuals authorized by court order.

Transcripts of these records can be purchased
for twenty-two (22) dollars each.

Throughout the year, the Clerk issues hunting and fishing licenses of different classes for hunting and fishing throughout New York State.
Both state residents and nonresidents are eligible for different classes of licenses.
What identification or proof of residency will I need to purchase a license?
1. For hunting and trapping licenses, proof of a prior license or appropriate sportsman education certification.
2. NYS residents applying in person or by mail may use one of the following proofs of residency:
- Your NYS driver's license or a NYS non-driver's identification issued by the Department of Motor Vehicles
- An IT-201 or W-2 income tax form for the previous year
- A current voter registration card
- A current NYS vehicle registration
military LES (Leave and Earnings Statement) or military orders_
- A current student ID card
-A current pay stub or letter from a current employer on letterhead containing your legal address.

The Clerk offers Deer Management Permits to licensed hunters for the Fall deer-hunting season offered through a state-operated computerized lottery system from mid-August through October 1st  of each year.

The Clerk issues both temporary and permanent- accessible parking permits upon physician completion of an application.
Many physicians have these forms in their offices.
These forms can also be supplied by the Clerk.
Applicants must appear in the Clerk's office with a driver's license.

"The Town of Pomfret is located in Northern Chautauqua County in the westernmost part of New York State. The town was officially created in 1808, but it's true beginning is seen with the arrival of Zattu Cushing in the spring of 1805. Mr. Cushing was the first permanent settler in Pomfret, although he was quickly joined by a number of other early settlers in the first five years of the town's existence. Within the town is the Village of Fredonia, which was incorporated in 1829 along the banks of Canadaway Creek. Within the town is the famous 1891 Fredonia Opera House, as well as the historic White Inn. Pomfret is a town full of history, including many famous visitors and organizations such as the W.C.T.U. and Grange #1. With such a rich history in business, the arts and education there is something for everyone in the Town of Pomfret."
-Pomfret Historian Todd Langworthy